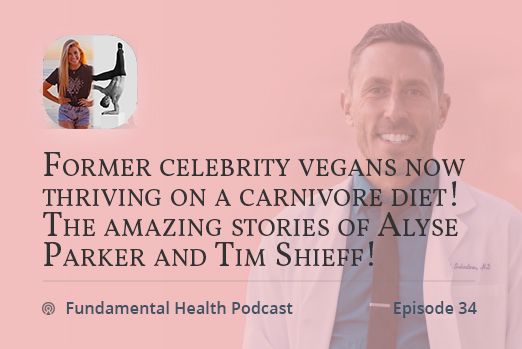 These two are truly amazing individuals!

Alyse is a former raw vegan who gathered a following of over 1 million people on YouTube and Instagram by sharing her message of positivity and self love. She received significant criticism from the vegan community earlier this year when she announced that she had begun eating meat and felt much better because of it! She is now thriving on a carnivore-ish diet and was recently featured on Good Morning America telling her story.

Tim is a world champion parkour (free running) athlete who experienced significant decline in his health after eating a vegan diet for 6 years, and has similarly found much better health since including meat in his diet. He was filmed for the Game Changers movie but asked to be taken out after his health suffered. Can we please get James Wilks to comment on that???

17:28 Is there a misrepresentation of health in the vegan community?

22:13 What was Alyse's diet before going vegan?

49:03 What is the ethos of the vegan community?

1:21:33 What is the most radical thing Tim has done recently?

Code SALADINOMD on the shopify site to receive 10% off.

Use the code CARNIVOREMD at www.whiteoakpastures.com all month for 10% off your order!